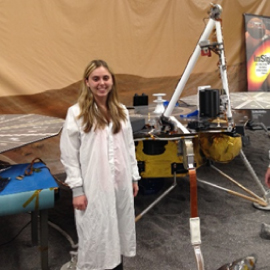 Astronaut Scholar Emily Boster had the opportunity to work on the monumental launch of the Mars Lander, InSight. "As I stood in the darkness, listening to the launch countdown, surrounded by JPL and Lockheed Martin Engineers, I couldn’t help but think back to my own history. Five years earlier, I was brought onto the program as a Mechanical Design Intern. InSight was nothing more than CAD models, paperwork, requirements, and specs. It was my job to turn those models into engineering drawings and figure out how to get them built. We were trying to reuse designs from the Phoenix lander, but some things had to change due to payload interfaces, mass increases, and aerodynamic load increases, among other things. I was hired on full-time to continue my work, eventually taking on the role of Payload Integration Engineer. Over the next couple years, we took the brackets, hardware, composite layups, and electronics boxes and formed them into a fully autonomous, robotic lander that we could talk back and forth with, initiate complex deployments of solar arrays, legs, robotic arm maneuvers, imaging, and payload operation to study the Martian interior. There were long hours in the lab, weekends and nights spent testing our lander. There was disappointment too, when a problem with the primary instrument prevented us from meeting our first launch date. Our partners doubled their efforts to redesign the faulty piece of the instrument and delivered a functional seismometer on schedule for our next launch opportunity. My roles on InSight had tapered off after 2016, yet I continued to support the program through media outreach, STEM events, and periodic surge support for Assembly, Test, and Launch Operations (ATLO). As we heard those final words, 'Three, two, one, zero and liftoff of the ATLAS V', I held my breath waiting to see a light through the thick fog of the central California coast. The ground started to tremble, and a roar approached and enveloped us, and the entire sky began to glow as the fog brightened above us. Just seconds later, the light was gone, and the sky was black as night. Cheers and yells erupted from the crowd and I couldn’t help but smile as I thought in my head, 'Goodbye InSight and safe travels on your way to Mars'."