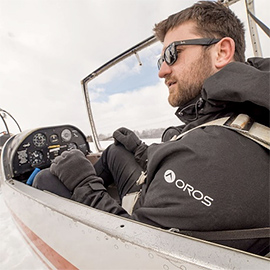 Back in 2013, OROS Co-founder & CEO, Michael Markesbery was on top of the world... And freezing. Before his trek to the top of Mt. Santis, Michael outfitted himself with the finest outerwear technology that money could buy, which amounted to animal by-products stuffed into a tightly woven shell. There had to be a better way. Michael was (and is) a self-described science geek. Like all true science kids, Michael dreamed of one day going to space. He was awarded the Astronaut Scholarship in 2014. Through that scholarship, he learned about Aerogel. Aerogel is the greatest insulation in the universe and is still the lowest thermally conductive solid known to science. And yet, nobody had perfected an Aerogel insulation that could be used in apparel. Light. Bulb. Moment. After over 10 Million dollars of Venture Capital Funding, a contract from the US Department of Defense, and 4 years of a science backed "design, test, repeat" attitude, OROS and Solarcore (OROS’ NASA Aerogel insulation) has arrived to bring about the future of outerwear.

In the last 6 months, OROS has moved its headquarters and team to Portland, Oregon, received a multi-million dollar contract from the United States Department of Defense, raised over $10M of Venture capital, supported STEM by partnering with Ad Astra (the school co-founded by Elon Musk & Josh Dahn), and launched our Fall 2019 line of products.