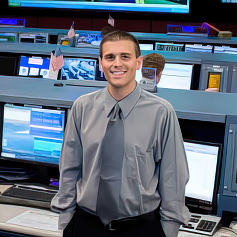 Today, East is living his dream working in Mission Control at NASA’s Lyndon B. Johnson Space Center in Houston, TX as a Trajectory Analyst for the International Space Station (ISS) and is training to become a Trajectory Operations Officer. His job involves knowing where the ISS is located in orbit, where it will be in future, and defending it against the dangers of space debris. East also maintains a database regarding the historical ISS trajectory and statistics about space debris in order to keep other research organizations updated, including companies that have payloads on the ISS.

“The Astronaut Scholarship has certainly been the greatest & most prestigious honor I’ve ever received,” said East. “The Astronaut Scholarship paid for every single penny of my education that year at University of Oklahoma, and the board was so gracious to renew that award for my senior year. My family & I didn’t have to worry about finances at all — All I had to do was study hard and chase my dream of working for NASA.”